Artifacts that highlight aspects of my inquiry process

The proposal was the first piece of writing that allowed me to put my ideas about my inquiry project into words. I knew I wanted to research interracial couples but I had no clue if it would be related to the topic of identity so I asked myself questions like "Is this related to identity?" I wrote myself a reminder in the top right hand corner and put a bubble around it which said "hurtful material" because from the very beginning I wanted to remind myself that I am getting into a very touchy subject. As a researcher it was my job to take myself out of my research and to become a non-biased researcher. I started with the information that I knew about the world and interracial couples already, for example:


I knew I wanted to watch interracial couple 'Boyfriend Tags' and the interview of Tamera Mowry-Housley on the Oprah show in tears when she saw the horrible comments said about her, her marriage, and her mixed baby. At the beginning, I only had 4 questions I wanted to find the answer to but after "workshoping" with my group I realized there was so much more I wanted to know about this group of people and how/ if their identities changed when they were together.

In the margins, I wrote ideas of how I would break my final paper done.

After deciding what I wanted to research, it was now time for me to find some sources that supported/ disagreed with my inquiry project on interracial couples. After reading the blog this lady wrote, I knew I would include it as a part of my research because it supported my statement that society is more tolerate of Black Men/ White Women couples. It showed how society may be starting to accept BMWW couples more because "there wasn't an obvious backlash to the new Cheerios commercial that showed Gracie's parents (interracial child of a BMWW couple) were having a second child. She was asking herself questions about why this had happened? Was it because the more images of interracial families we see the more we get used to them? This article also showed how big of a role race plays in our society. Commercials are now starting to feature interracial couples and their children. As the times change, so is the media. They have to keep up with the times and display the new family dynamics. She states that Black men are stereotyped as "a threat and a danger" and that's exactly why people did not want the black man to be with the white female. The article states that, "A big part of why people were riled up about Gracie was because she was the literal fruit of a paring that they did not want to acknowledge. Seeing a couple together who personally offends you is one thing: seeing that they've procreated and have made more "like them" is quite another." 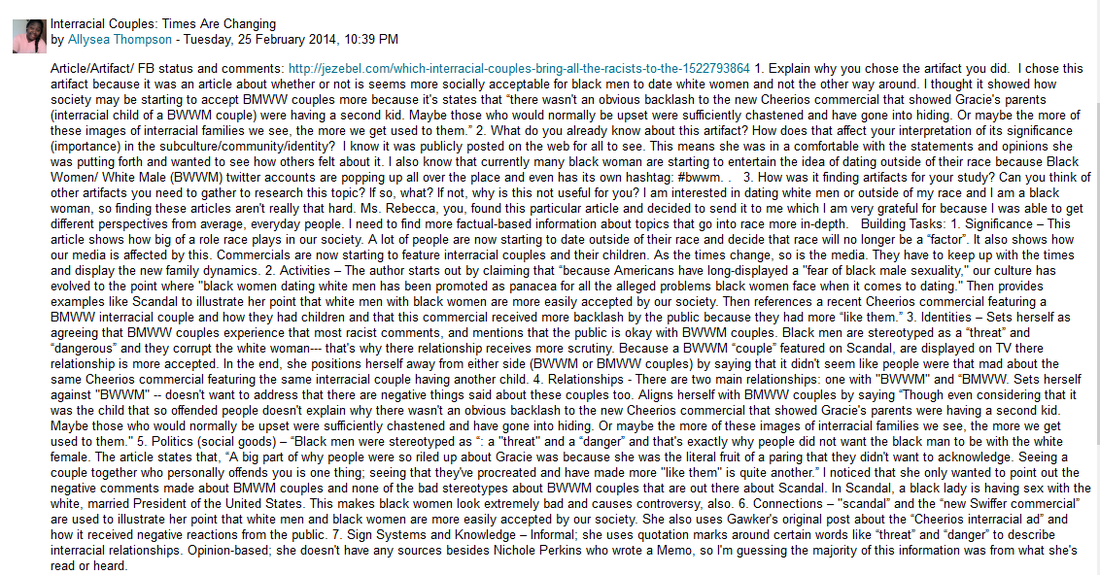 After I completed my research and found my sources I decided to create a YouTube video. With the YouTube video, I would be able to just talk about my topic and include different segments of the video. I could break the video into different sections (history, culture, interview) and talk about each in-depth. Also, with a video I can include my emotions and a little bit of personal opinion. People can get perspective from an African American female who is attracted to white males. Plus, once you upload a video you never know who will see it and comment it on thus "continuing the conversation." This genre piece seems like it would be the most interesting and more of my style of work. I started out with why I chose to research this topic and how it relates to identity; using Gee. In the History section, I started off with facts from slavery and how white slave masters would often have sex with their black female slaves. Thus, making mixed children who were often favored and given special privileges because they were fairer-skinned (inserts picture of mixed girl working in the house). Then I moved on to say how things changed and became more open when the Supreme Court case, Loving vs. Virginia, stated that it was unconstitutional to prevent people from marrying based on the premises of race (inserts the individuals who brought this to court). In the Social Media section, I talked about how many people have weighed in with their opinions on interracial couples and relationships. I'm going to talk about how I discovered a white guy on Facebook who loves black women and created "12 Common Stereotypes About Black Women & White Men relationships (inserts picture of Brody's 12 Common Stereotypes list). I'll then talk about how Ice-T, a black male celebrity who is married to a white woman, created a blog called 'Tens Reasons Black Men Prefer White Girls." This article caused so much controversy that someone created a counter-blog called "Ten Reasons Black Women Prefer White Men.' In the Culture Section, I wanted to talk about the common stereotypes that are placed among black woman and how those assumptions make white men more hesitant to talk to, pursue, and like black woman (inserts memes created about AA woman). In the Interview section, I am going to include clips of Jessica and Zak's interview so that people can get perspective. I'll also include a clip of Tamera Mowry-Housley's heartbreaking interview with Oprah Winfrey where she talked about the hurtful things that have been said about her and her mixed child. 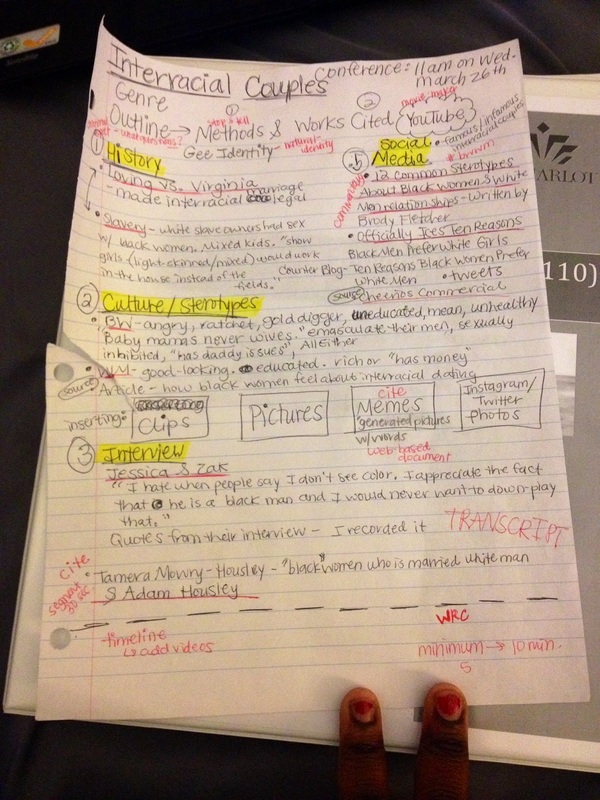