Below is the first paragraph from Amanda's paper and 4 of my comments. Last semester, I believed I was not that good at responding to my peers work but I believe this semester I have progressed into a pretty good responded. Having you for English 1100 forced me to comment on someone's flow, content, and purpose rather than just grammatical and that's what I did. In comment [AM1], I state, " I think adding information about where you were last year to where you are now would be a good way to start you reflective letter." Here, I am simply suggesting what I believe would allow the reader to better understand how far Amanda has come from last semester. I use words like "I think" to let the reader know that this small change would fill the "gaps" or "holes" in their writing and make it flow better. This gives them the opportunity to consider this revision and to see if they feel the same way. In comment [AM2], I ask, "What were the most important topics in this class to you?" She did not complete her thought in the second sentence so I asked her some questions that would hopefully provoke some thought for her to finish the sentence. In comment [AM3], I wrote words like "I totally agree!" to let Amanda know that I can relate to what she is saying and I'm sure other people in this class will too! I have came a long way from English 1102 and I now believe my comments are extremely helpful to my peers. 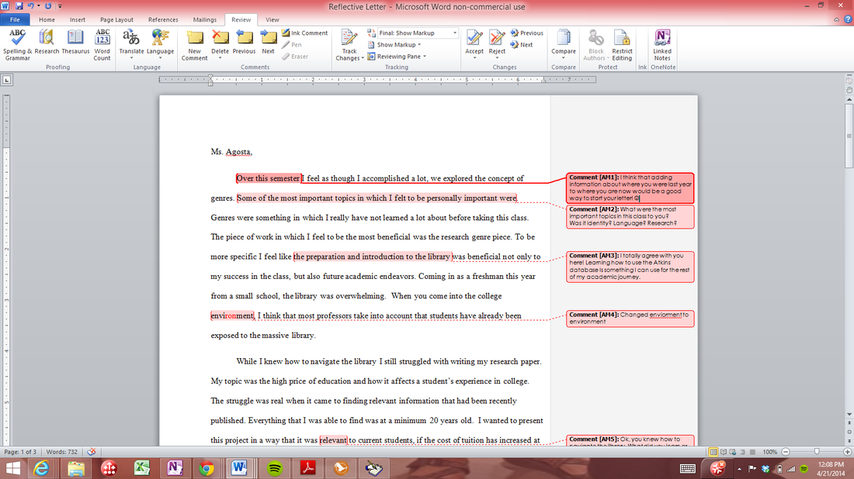 I really liked your feedback on my YouTube video transcript. I had never created a YouTube video before and I was confused about how to go about it. You stated that "You loved the fact that it was conversational like lots of YouTube videos", which let me know I was following the rules of this particular genre. With this comment, you let me know that this introduction would be common to see if you were actually watching a video. Since you could not see the video, I decided to include wanted to let you know what I was thinking in terms of visuals and design aspects. In your second comment you stated, "I like the overlap idea" but to "make sure the viewer can read the questions." It's ironic that you put this because you addressed one of my concerns too! I wanted the viewers to know what types of questions that I asked that lead me to find the answers I was presenting in this video. In your third comment, you wrote "Keep going!" To often, I believe people do not normally give others positive or encouraging feedback on their writing and that is why people don't like when others review what they have wrote. Your comment let me know that you could not wait to see the finished piece and I was heading on the right tract.

Below are sticky notes with feedback from 3 of my classmates on the first assignment (Critical Narrative) for the class. I created a Prezi titled "Who Am I?" which focused on how not having my biological dad physically involved in my life had affected me emotionally, socially, and mentally. I presented the reader with 2 very important questions that I wanted feedback to help move my piece to a more enticing and meaningful piece.  I really enjoyed this "open" type of workshop because 1.) I did not know who was reading and responding to my work, 2.) It was informally written so the comments were short and simple and 3.) multiple people had a chance to read my work. All 3 of these aspects allowed me to receive comments that I could actually apply to make my project better. Reader #1, not only answered my questions, but quoted sentences in my paper and grammatically fixed them. As you can see from the word "Edit", the reader told me to change "you" to "to", and "on" to "in." Since being in your English class, I've realized that commenting on someone's grammatical errors does not really help them but these simple changes that this reader pointed out may have really distracted him/her from understanding the piece. 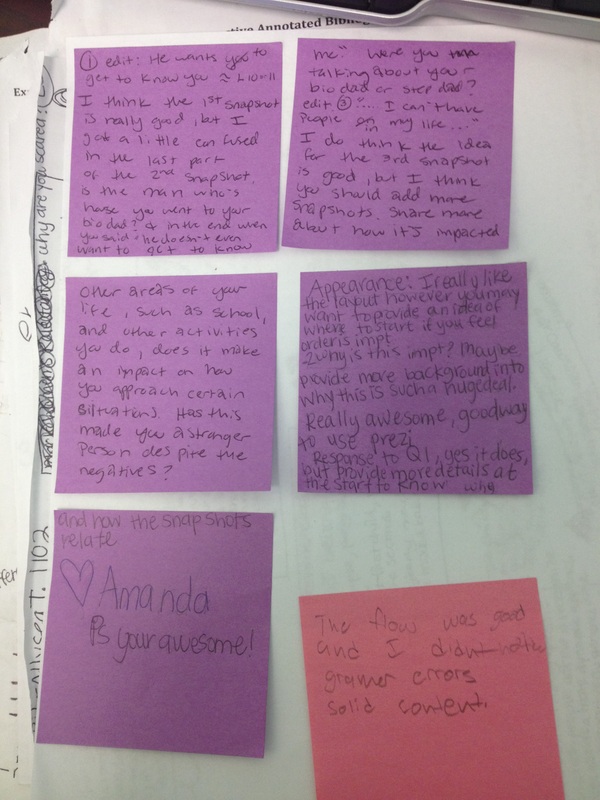