I chose to add this particular meme into the wild card section because I was truly unaware that a lot of people were not familiar with the term "swirling". I never really thought of it as a word used in a particular genre or setting but it is. "Swirling" is a way of describing an interracial couple between a black person and a white person. Based on the "swirl" ice cream cone, a cone consisting of an equal part of chocolate and vanilla ice cream. It is also way less offensive than using the word "Jungle fever." On Instagram and Twitter, my username has been 'DwnWithTheSwirl" and is currently "swirlin." Many of my friends would ask me "What does swirlin mean?" I laughed because I thought everybody knew those words. Saying you are a "Swirler" automatically puts me into a group and understanding the terminology within this group of people is essential to understanding that groups lifestyle. 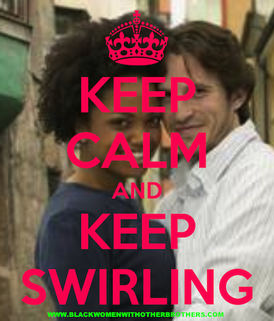 This is probably one of the most eye-opening interracial memes from Instagram! It is so true and speaks volumes about how society has a double standard when it comes to black women dating outside of their race but not black men. All three of these men (Terrance Howard, Taye Diggs, and Harold Perrineau) each playing loving husbands to BLACK women in the movie Best Man. A lot of African-American woman flooded the movie theaters to see these men and the movie. This however is extremely ironic because each of these men are married to WHITE women. When I saw this meme, I was truly shocked. I couldn't help but ask myself, "How can they play black men who are so in love with their BLACK women when in reality they have never had one?" 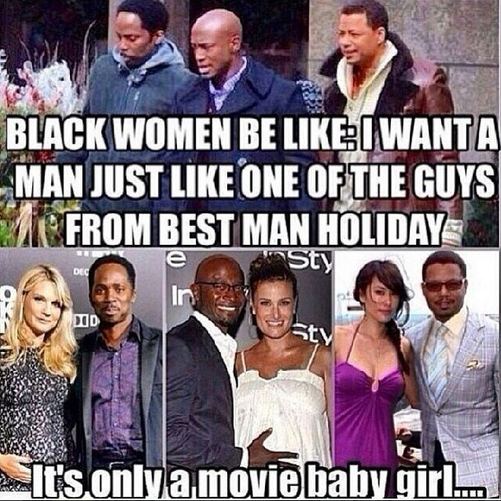 This is probably the cutest meme ever made! This is the little girl from the Cheerios commercial saying "All the problems in the world today, and you're mad cause my parents don't match?" Sadly, this is so true! People are steady worried about interracial couples and them procreating and having mixed children and how it is so wrong. To be honest, there are bigger problems in this would like GLOBAL WARMING, THE WATER CRISIS, THE AMOUNT OF CHILDREN SOLD INTO SEX TRAFFICKING, AND THE AMOUNT OF HOMELESS KIDS IN THE WORLD! We need to stop this white vs. black fighting because it is pointless. The things that happened during slavery and the Civil Rights Movement need to be remembered and then forgotten. We all bleed red and need to move forward. The generalizations and preconceived notions need to be let go and destroyed. Skin color does not dictate what kind of person someone is or what kind of person they will be. 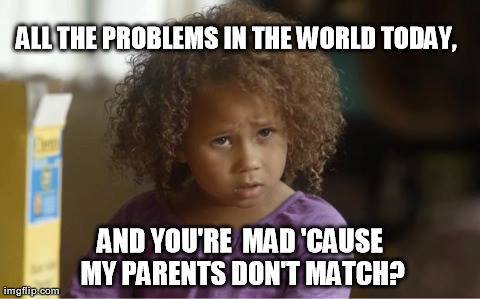 This particular meme gave me such joy! I have no clue if you know who Ryan Lochte is but he an Olympic swimmer. He swam on the Olympic team with Micheal Phelps and apparently, he just moved to Charlotte!! He is absolutely gorgeous and happens to be a white guy. A black lady mentioned him on Twitter basically asking him if he has ever bee with a "sista" and implying that she does not think he is ready for that because he is white. However, Ryan comments back saying he has been with a black girl before. This is extremely rare!  He is a famous white guy that admitted to liking black girls and possibly dating one. I wasn't shocked when I saw this picture because I could kind of tell that he liked black girls by the way he acted. He wore gold grills or "fronts" (which many white guys NEVER do) and had this kind of confidence about himself. He looked like he could "handle" a black girl and everything that came a long with her. 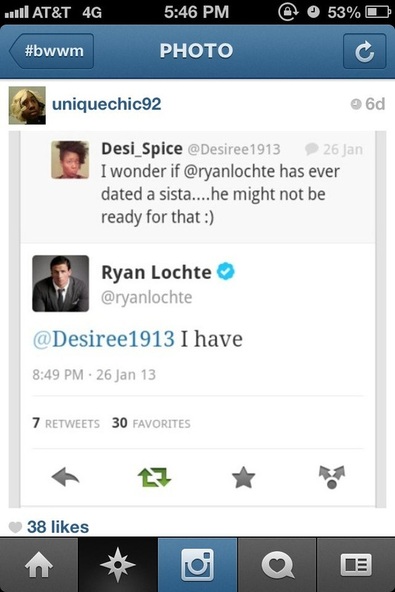 This is probably the truest interracial memes! Many of the kids in my generation are too scared to admit that they  find other racial groups attractive. They are afraid of what their parents, friends, family or community will say if they bring someone of a different racial group home. Black girls commonly believe that white guys would not be attracted to them because they are black. Being a black female already comes with negative stereotypes like she's ghetto, ratchet, angry, mean and loud. The black girl feels like they are not what a white guy is looking for. On the other hand, the white guy is thinking that the black girl would never go for him because he is white. Many white guys feel like they can't be what the black women wants when it comes to looks. What's so ironic about this picture is that these two opposite groups of people are often thinking the same thing about each other! They each find the other attractive and if they would just let go of the biases, stereotypes and stop being so scared they could possibly find love with someone of a different race! 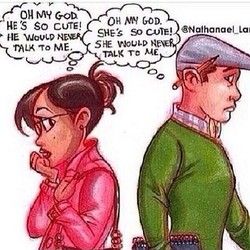 Of course, I had to include a picture of a black women and a white man getting married. This picture is so cute! This is exactly how I see my future. I hope to someday be with the man of my dreams and there is a huge possibility that he might be white. I am not afraid of what others think or will say about my future partner. I have come to the conclusion that I do not want to be with an African-American man because I am attracted to the differences between white guys and myself. I love the different skin tones and shades, the hair texture, the eye color and so on. I am not a sellout or a trader for doing this. I should be able to choose my mate and who I want to be with because it's my life! At the end of the day, I want to be with someone who makes me happy and loves me and if that's a white guy.. so be it! ♥ 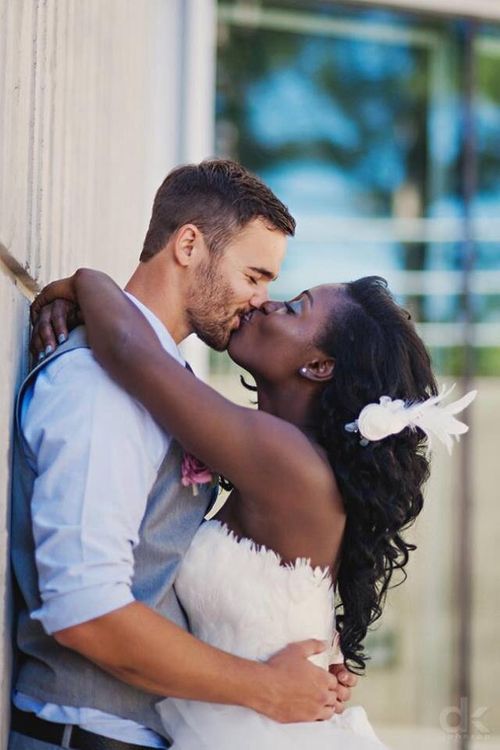